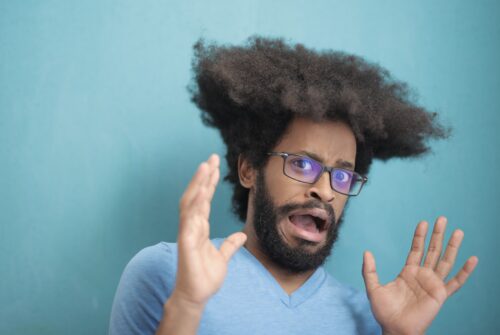 I can talk like a red hot hottie. I can sound as though I’m wearing nothing but a layer of baby oil and a willing smile. Loads of commercials I get to voice have the direction ‘sexy’ at the top. And sometimes I do a voice that sounds too sexy – I mean, who wants to hear a sexy voice on an ad selling cut-price compost? – sometimes a sexy read is just gratuitous, and if I had a quid for every time I’ve been asked to recreate that scene from ‘When Harry Met Sally…‘

I get asked, often.You know, doing some dubbing, reading a saucy story and so on. A few months ago a bloke rang up to ask if I was interested in doing some work for a phone-line. “What kind of work?” I asked, suspiciously. “Oh, it’s nothing rude, like,“ he said, defensively. “It’s just a phone line that gives people medical information.”

I wasn’t convinced. The guy sounded like a cross between Bernard Manning and a sweaty thong. “What kind of medical information?” I asked.

I’m not a prude – hell, far from it – but I don’t think I could do that kind of thing properly. For one, I couldn’t take it seriously.  I’d burst out laughing on the build-up to the money shot… But also I don’t know how I’d be able to look my kids in the eye and know what I’d done to pay for their Play Dough. And to be honest, there’s something icky about knowing that on cold, lonely nights, somewhere, for someone, my voice is providing relief…

“I want to hear the sexy.” The joy of giving direction to a professional voiceover.