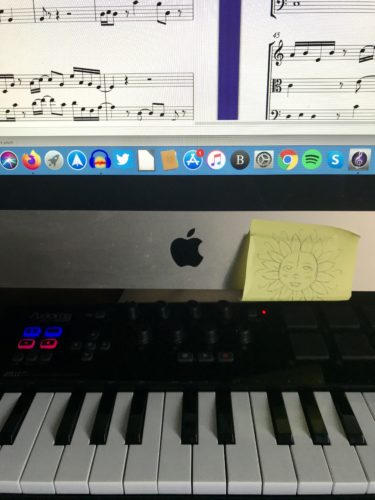 Today I recorded a radio commercial for a car dealership which is holding a Motability Open Day.  There was no direction on the script but I knew it was to have accompanying music.  (There was a tell-tale ‘Music in’ direction on it that gave the game away…  I’m a policeman’s daughter, you know).  There was no clue what style the music was to be though, so I asked the producer as obviously the style of music dictates the style of read required.  He told me he hadn’t chosen it yet.

“I guess it’ll be something quite laid-back and lifestyley, instead of the usual hot ‘n’ pumpin’ car ad music…?”  I said.

“Yeah, I reckon so,“ agreed the producer.

And then we had a chat about the assumptions we’d both just made about Motability customers.

We’d assumed that because the ad is aimed at disabled people, the ad would probably be best suited to something gentler, more ambient, more empathic than the grinding music of conventional motor industry ads.  And why did we think that?  Well, I confess I had an image in my mind – and I’m not proud of this, Reader  – of a Motability customer who was at least middle aged, of a temperate disposition, a person who enjoys National Trust parks and wears a cardigan at weekends.  Basically, the sort of person who wouldn’t enjoy or be moved by (in a consumerist sense) grinding music.

But when we choose music for radio ads, we make these kind of assumptions all the time.

For college ads aimed at school leavers, the music will be ‘of the moment,‘ possibly a bit urban-sounding, but certainly fashionable.  If the ad is aimed at mature students keen to retrain or change career path, it’ll be motivational, aspirational.  For women returners, the ad might feature soft, acoustic guitars.  And obviously the style of voiceover will match the music.

When classical music is used, we’re aiming at the high-end market; discerning consumers who we assume will appreciate the finer points of fugues and therefore be moved to put their hand in their big, deep, Mozart-loving pockets.  For example, classical music is used in high-end housing development ads (rustic 5 bed barn conversions in a semi-rural setting close to a motorway network, that kind of thing), high class furniture stores that specialise in crafted wood and leather, and commercials for wedding fayres.  Not only do we imbue these listeners with the level of class and intelligence we in the advertising world deem necessary to part with thousands of pounds to pay for a country house hotel wedding, we assume that because there’s a marriage in the offing the punters will be in a serious, classical-music-appreciating frame of mind.   (It wouldn’t do to have a wedding fayre ad featuring a piece of library music called ‘Whips and Chains’ or ‘Mr Tumblewink’s Picnic’ would it?)  And of course, we assume that people who like classical music are always wealthy and have impeccable taste; this is advertising FACT.

Now I know a lot of this is about matching the style of ad to the style of music, but I have a suspicion that the choice of music (and therefore voiceover style) is based on the sweeping generalisations we inevitably have to make about the Ideal Consumer for that ad we’re making.

When the producer / sales exec / copywriter presents the ad to the client, we have to be pretty confident that we’re presenting an ad the client will like.  That means an ad the client assumes his customers will like…which may or may not be the same thing.  To get the ad cleared and off the commercial producer’s desk, the music has to satisfy the client’s marketing objectives – and that means that the music has to be the sort of thing the client reckons the target market will respond to.  And that’s when we get to the assumptions thing because without it, we’d be saddled with loads of remakes.

So how did me and the producer resolve the issue of how I should read the Motability ad?

We played safe and went for the light, conversational assumptive read to match the light, lifestyle music with which it’ll be coupled.

Narrow-minded?  Bigoted?  Possibly.  But I’m sure it won’t bounce back for a remake.

Excuse me, would you like to rent my mouth?

“Can you break physics and make this commercial read to time, please? Thanks!”