poetry in commercials – why poetry should be handled with care… 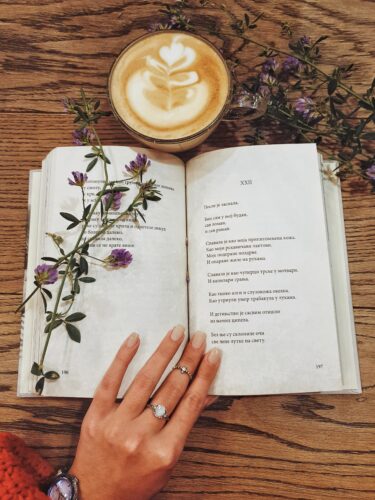 Poetry in radio ads is very common. There’s usually a poem bit before the main announcer gets to the point, tells the listener the client’s name and how to avail themselves of the product being sold. The poetry is usually a preamble to the call-to-action.  It’s meant to beguile the listener, to relax the audience: it’s a sort of verbal rhyming back-rub, if you like. Rhyming couplets featuring a comforting dum-de-dum rhythm most often show up in ads for baby equipment, day nurseries or breast-feeding infomercials – squishy products and services that make you feel all warm inside. The poetry, I suppose, is meant to invoke memories of a happy childhood, or at least the halcyon days of innocence…

There’s also the weird poetry that shows up for no good reason whatsoever in bizarre, random ads for things like welders, conservatory showrooms and cut-price shoe emporia.  (Why? Why??)  And of course there’s always the poetry often found in serious ads about drink-driving, seatbelt-awareness campaigns and ads that give horrific, ambulance-inducing accounts of a bone-crushing industrial injury in the hope that the listener will be moved to call the personal injury lawyer mentioned at the end of the commercial.

Poetry is often the copy-writer’s fallback position when all other ideas fail. Or, more likely, it’s the client’s idea. The copywriter gets a message from the sales exec who’s been told by the client that his wife’s cousin’s neighbour’s had a brilliant idea for a rhyme and he simply insists it goes into the ad. This sometimes occurs without any real consideration being given to the appropriateness of the poetry, if it enhances the client’s brand values, reflects the qualities of the thing being advertised, or if it’s even any ruddy good.  And usually, that’s how poetry bludgeons its way onto the airwaves.

Now, I’m unable to quote actual examples of poetry I’ve been asked to read in the course of my work, for legal reasons. No blog is worth a lawsuit. But I’m sure the fictional examples below will create at the very least, a nod of recognition from my esteemed colleagues. All the examples below are, regrettably, plausible…  Firstly, a likely ad for a day nursery.

(Music:  A light musical box melody.  Something like ‘Twinkle Twinkle Little Star’ or other royalty-free music)

When it comes to looking after your babies,

Bring them here – they won’t get scabies!

We’ve got qualified helpers, all smiling with glee –

Even though daily they’re covered in wee.

Next up is the kind of poetry written by a writer who genuinely believes themselves to be a burgeoning Sylvia Plath, straining against the shackles of radio copywriting. The text usually belies a misguided sense of alliteration, onomatapoeia, some kind of avant garde imagery and is almost always woefully inappropriate. This kind of poetry usually turns up in ads for the more sensual product or service: the health spa, the restaurant or for luxury items like scented candles or furry scatter cushions. The example below is for a pizza restaurant.

Music:  salsa.  (Yes, I know the ad is for a pizza restaurant and pizza’s Italian and salsa’s not, but when has reality ever encroached on advertising?)

Zing to your palate –

And BANG!  Went the breadstick!

“Mmm,“ said the diners.  “This pizza gets better and better.”

Last up is the serious ad. The heartfelt ad that aims to provoke thought, change life-threatening behaviour or compel the listener to seek further information from various government agencies. Generally speaking these ads focus on big, scary issues…often, like this example, the error of not following the advice of health and safety officers. Usually they start off sounding quite cheerful, bouncing along happily on the poem’s jolly rhythm. But then the mood darkens, the poetry becomes plaintive, the voiceover intensifies, the sound effects morph into something more sinister, and there is almost always a drone…

Jason got to the office bright and early,

He wanted to look keen – but not like a girly.

He got a coffee and had a quick fag –

He was sure he wouldn’t end up in a body bag.

But nobody checked the office smoke alarm!

Especially the accountant who was very asthmatic.

(The drone gets very loud indeed.  The voiceover gets even more apocalyptic).

After the fire, Jason wept and was distraught

At the chaos a simple cig had wrought.

So many lives and buildings senselessly ruined –

So be sure, a smoke alarm, you must screw-in.

Truly dreadful, isn’t it?  As I say, these examples are pretend…but they’re oh so near the truth.  Remember:  handle poetry with caution.

The bliss of creative freedom

Voiceover ethics – a shortcut to hypocrisy?