What is the culture of urgency? And is it driving you crazy too? 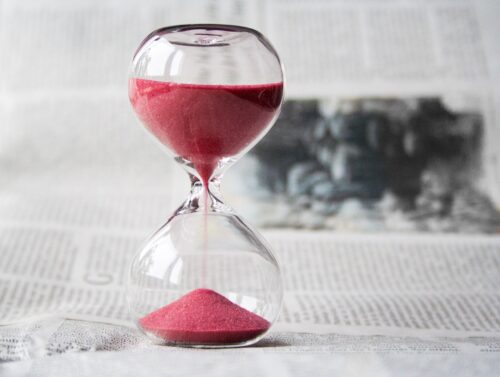 The voiceover industry is a fast-moving business. Voice jobs arrive, get voiced, get delivered, get invoiced.

Sometimes people ask me how long I spend rehearsing for a voiceover job. “Oh there’s no time for rehearsal,” I tell them. “We just, you know, get on with it.”

“How long do you have to complete a job?” they ask. “Couple of days?”

Since I started voicing (sometime back in the 1870s) the turnaround time – particularly for independent local radio ads – has got shorter and shorter.

To the point where it’s expected that only Planck time exsits between the script brief landing and the voiceover delivering the file.

Clients are given a green light by their clients and suddenly the voiceover is activated. Like a cyborg emerging from its gooey hibernation pod, blinking, confused but absolutely ready to deliver broadcast quality audio. Or so it might be assumed.

But voiceovers are, shockingly, only human.

Voiceovers and their work lie at the bottom of the production hill. At the top (one assumes) is the sales exec who closes the sale with the client and then rolls the script brief down to the copywriter who (eventually) passes the ball down, down, down to the producer who deftly catches it and dribbles it across to the voiceover who’s lurking, digitally, somewhere in the depths of the Chasm Of Production.

Sometimes, it’s assumed, that until a script lands in their Inbox, the voiceover is in slumber mode. A sort of moribund dream-state where only basic biology functions.

But waiting, always waiting for a script to arrive. And when it does, brain, limbs and organs of speech immediately crank into action and the script is voiced.

The reality, clearly, is different.

Pro voiceovers record multiple jobs in a working day and spend quite a lot of their time in the voice booth recording. This means there might be several minutes’ delay in replying to a client’s email.

Gone are the pre-digital days when voiceovers would drive around the country visiting radio stations to record a clutch of scripts before hitting the motorway again to call on the next radio station to do the same, and so on.

Gone, even, are the ISDN days when voiceovers would do remote sessions with producers ‘over the line’ in pre-scheduled 15 minute blocks of time.

Now, we mostly record alone in the muffled hush of our acoustically-treated voiceover facilities.

Now, most of our work arrives by email: the script, the instructions, the deadline.

Now, we rarely get to speak to clients.

Our work communication has been transformed from conversation into pixelated messages on a screen and the voice our client hears is in binary code.

The humanity of the industry is getting lost.

Sometimes I get the sense that for some, voiceovers are just text-to-speech converters. Instantaneous suppliers of jack-in-the-box wav files. The appification of life has created an expectation of immediacy: press a button, something happens.

But we are not apps. We are not slow-to-load web-pages.

I get it, I do. The pressure to complete jobs is huge. The boss’s boss’s boss is leaning on her and consequently everyone further down the line is falling over.

But they’ve been tough for years.

It was bad after the financial crisis, it was bad after Brexit, it got worse during the pandemic and now everyone is running around as if their hair’s on fire.

Everyone in the production pipeline is under pressure. Everything needs to be done yesterday and everyone, it seems, is in a perpetual state of urgency.

Why does it have to be this way? Would it hurt so much to build in even half a day’s breathing space?

Is pre-production planning in such a parlous state that allowing four hours’ turnaround time is impossible? Even a full working day?

It’s not unusual for me to miss a job because I didn’t reply fast enough to an email. And when I say ‘fast enough’ I mean within half an hour (because I was recording something else for someone else). Last week I missed a job because it took me eleven minutes to reply.

Is that where we are now? Truly??

For the sake of everyone’s sanity, please let’s just take a minute – if your schedule allows – to think about this.

Voiceovers are human and quality bespoke work takes time. Can we accept that as a given?

One of my sincerest wishes for the new year is that we hit the reset button, take a breath and begin 2023 without the perpetual existential sense of desperate, panic-inducing urgency.

Would it be so hard to take our feet off the gas and…enjoy our work? Even savour it? Just a bit?

Or for long enough, at least, to reasonably reply to an email.

Want to hear some podcasts I’ve worked on? Click here.

me and the marzipan taco comedy podcast

The world is going mad. Can someone please hit the reset button?

Awkward Advertising: The Boots ‘Not giving gifts this year’ ad