TV Confessional – a piece of music in progress 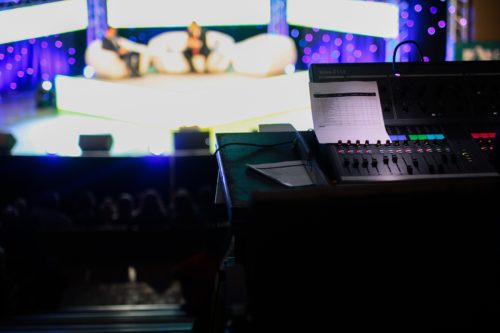 I’ve been writing a piece of music that’s not quite finished yet, but it’s interesting (for me, at least) to see how a piece evolves and develops over time. (I guess this part of my blog is a kind of composer’s notebook). The shape of it’s there and it’s as complete as a first draft ever can be. I’m not sure yet what this piece will eventually turn into – a longer piece, a concerto or maybe it’s already told its own story and is almost done.

The piece is based on the idea of a TV Confessional. This is the kind of bare-all interview people do on television – you may have seen one in a prime-time documentary special, a morning TV sofa piece or the kind of probing journalism enjoyed by Piers Morgan.

I think people do these interviews to garner support, to evoke sympathy or to rehabilitate their public image. They certainly ‘speak out’ to get attention. I’m fascinated by this kind of disclosure. Why do it? Why risk the hell of being trolled? Is the narcissistic buzz of telling the world about the underbelly of your life worth the backlash? I don’t understand it, which is why I thought I’d write some music about it.

I wanted to explore in music how gender might be represented, along with trying to capture the subtext of one of these TV spectacles. These kind of interviews seem to be about exploitation – but who’s being exploited? The protagonist who’s confessing/defending their wrongdoings? Their ‘victims’ whoever they are and what’s been done to them/with them/for them? Or is it us, the audience?

The piece opens with a lament. (It’s meant to start in almost silence building to a soft crescendo but I’ve not figured out how to get Sibelius to do that yet…). It’s a sort of self-pitying, sorrowful and slightly hammy theme in the first bit. There’s also a hint of sirens in the opening too – are they police sirens or the sirens that lure sailors to their doom?!

As the theme develops, we get the sense of optimism as the decision is taken to do an interview – a sense of ‘the cavalry arriving’, a sense of rescue. Then the lament is expanded a little, with a Jaws-esque cello in the depths (!) bringing a sense of threat. We have a sense of a predator – but who’s being pursued? Who is under threat?

Then there’s a bigger sense of tension as something is being fought for. Our protagonist is trying to tell the people around him/her that doing a TV interview is a really great idea. His/her advisors are sceptical…

In the next (slightly darker) section, we move on to the interview itself. I’ve written the first violin to feel like speech, a monologue, explaining and justifying itself. Below the violin, we have lower rhythm on the viola and cello; this is meant to represent a sort of Morse-code like idea of information being transmitted, and the noughts and ones of computer language as the world cottons on to what’s being discussed in the interview and it starts trending on social media.

The violin represents what our protagonist is hoping they’re saying, although this is impossible as we’re listening in to their subconscious and the things they can never say out loud… There’s a shrug, a wink and a sensual sashay of the hips – a sense of ‘hey what else was a guy to do?’ Further on, the violin brings a sense of nervyness and as this section progresses, words come tumbling out frenetically.

Then we hear laughter from the audience and then the panic really sets in. The violin tries to tell its story but it sounds strident and frightened. It tries to get our sympathy by returning to odd notes of the opening lament.

The piece finishes with the violin and cello expressing the lament in dark harmony. We’re left with a feeling of sorrow, shame and regret. (As one pal said somewhat ruefully, “You’re describing my sex life.”)

I wrote this piece quickly in between work, laundry, shopping and so on. But it took on an urgent narrative in my head so it spilled out over about four days.

It’s not finished and I’m still mulling how to develop it. Anyway, I really hope you like it.

Want to hear more of my music? Click here.

Want to hear some of my voiceover demos? Of course you do!

Want to learn more about the other stuff I write? Click here.

Who will sing at the inauguration?

up close and personal