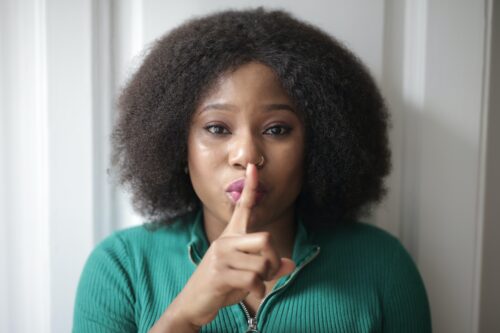 When we do ISDN sessions everything’s recorded remotely so I never get to see producers or customers: I never get to see the whites of their eyes… For customers who aren’t used to recording like this, it can be a pretty weird experience. I know it must be odd being in a session with someone you can’t see but that doesn’t mean the voiceover isn’t a real person with their own thoughts and ideas. (Although I did manage to freak out one client by pretending to be the disembodied voice of his conscience…my how we laughed). A voiceover is a vocal puppet that’s hired to do the bidding of the customer. And that means picking up on a lot of non-verbal stuff – vibes, atmosphere, inference – because the customer’s invisible. A lot of the voiceover’s skill is decoding what the customer’s telling you she wants…when you know absolutely that what she’s asking for won’t work in a million years, or isn’t even what she really means. It’s a subtle job, this. Picture the scene: I’m in my recording studio, the client’s on the other side of the world and she’s telling me she wants a ‘happy’ read for her funeral home corporate video. And I know that really isn’t what the job needs.How do I handle it? Just give her what she’s asking for, take the money and run? Sometimes, Reader, I’ve been tempted. But that isn’t really on, is it? This is how it goes:

Customer:
So try it again with lots of smile. Think fun!

Me:
Are you sure that’s what you’re after?

Customer:
Look, bitch, the CEO okayed the script as well as me, and he’s in MENSA so if you could just do it…?

Me:
Sure, I’ll give you what you’ve asked for…but I’m a bit concerned that the music that’s going behind the voice is the funeral march. Won’t that jar a bit with an upbeat read?

So I read it and hope the client realises that what I’ve recorded is rubbish. Then, for my own conscience’s sake, I offer to record an alternative in the style I think is more appropriate. I always try to guide the customer through a range of options by doing different styles of read so they can hear the difference between ‘happy’ and ‘warm’ for instance. Often the customer will hear the change in tone, the change in pace, emotion and empathy and be prepared to change their thinking. But sometimes the customer’s so fixed on an idea, so convinced that what they’re saying is gold-dust that it’s a challenge to dissuade them.  When that happens and the customer won’t budge, all you can do as a voiceover is do what you’re being asked to do, even though you might think it’s misguided…

And without being able to see the customer and their body-language, the voiceover has to become an expert on the unsaid word bellowing down the ISDN line. The trick is to instinctively know what the customer is really thinking, and not what they’re saying. And also when to shut up, read it like they’re asking, take the money and run for the hills.

My accounts guy is lolarious!